The Nothing Phone (1) was one of the most hyped-up phones in recent memory. The company released a ton of information about the device beforehand, while leaks filled in the blanks. We knew almost everything about the phone even before it launched. The device became official on July 12, though, and gave us a full picture. In this article, we’ll try to offer all the relevant Nothing Phone (1) information in one place.

We’ll talk about the phone’s price, specifications, accessories, variants, and more. The Nothing Phone (1) surely is an interesting device. From the design standpoint, it may even be the most interesting smartphone of the year, at least as far as regular smartphones are concerned. Its uniform bezels, and see-through backplate with LED notification lights surely attract attention, to say the least.

How much does the Nothing Phone (1) cost?

First and foremost, please do note that the Nothing Phone (1) is not available in the US. It was kind of confirmed it won’t be coming to the States before it even launched. We’re not sure why that is, but it could have something to do with the carriers. In any case, the phone is available in a number of other markets, including both Europe and India. The device does come in three different variants, though.

Pre-order the Nothing Phone (1) (Nothing) 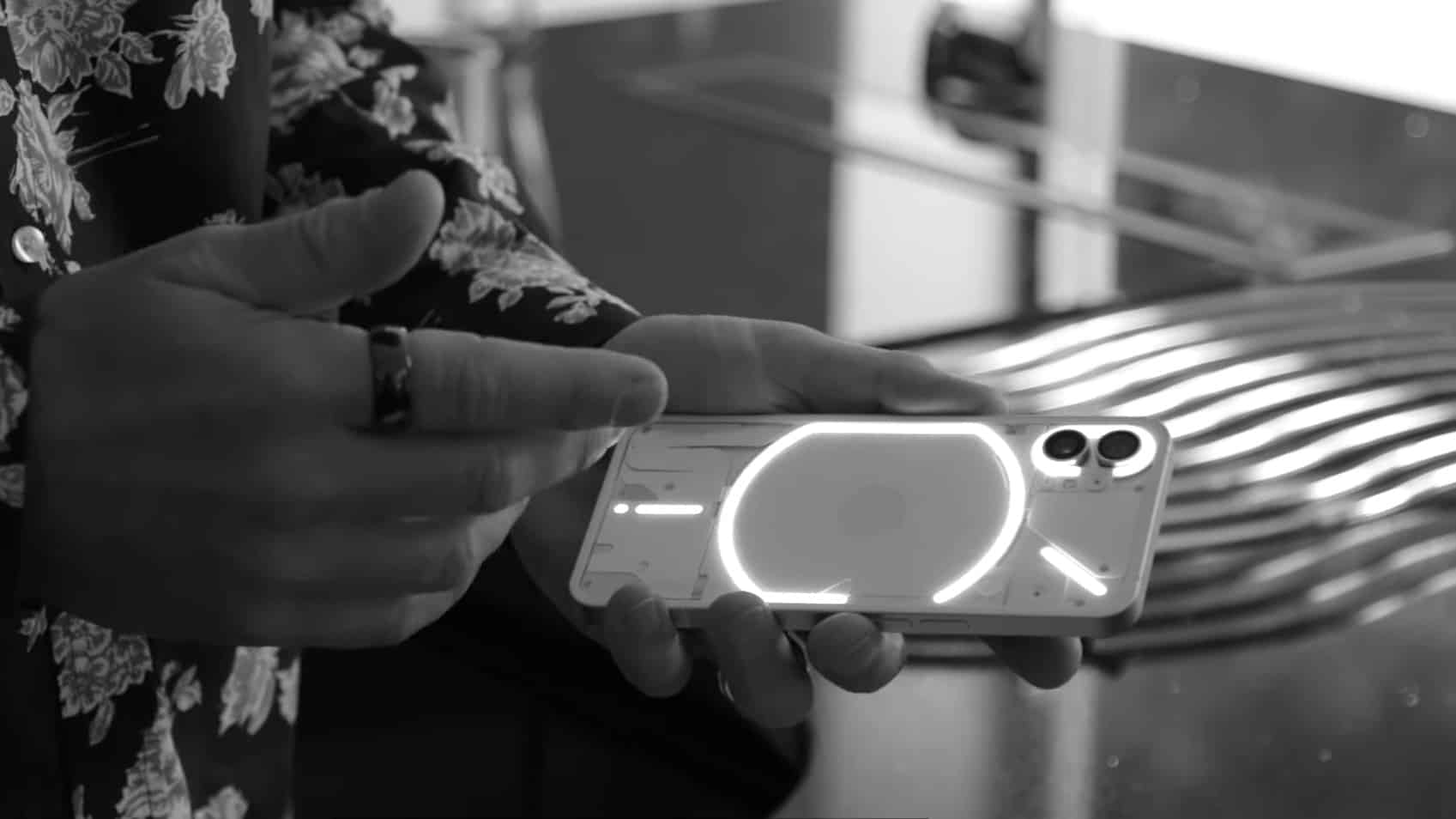 Should I wait for a price drop?

Considering that the Nothing Phone (1) is the very first of its kind, we’re really not sure where things will go from here. The Nothing Phone (1) is the first smartphone ever from the company. We cannot know if Nothing plans any discounts, but chances are the device will keep its price for the foreseeable future. If we had to guess, we’d say that the phone may get discounted, but only when its successor ends up being close by, or for some sort of a special occasion. In other words, we don’t expect it to get a significant discount anytime soon.

What offers are available at launch?

There are no launch offers available in Europe, at least not directly from Nothing. In India, all three variants did launch with discounted, limited-time price tags. The three variants, with the discount included, cost INR29,999, INR32,999, and INR35,999. Do note that both in Europe and India, the device is available to pre-order, open sales will open on July 21. Well, unless you joined the waitlist prior to launch, in which case you received a purchase link already.

Where can I buy the Nothing Phone (1)?

In Europe, you can purchase the phone directly from the company. There are also some carrier partnerships that Nothing put in place, though, in case you’d like to get it on a payment plan or something of the sort. So, for example, in the UK, it’s available exclusively from O2, as far as carriers go. In Germany, Telekom got the exclusive. In India, you can grab the phone from Flipkart, one of the largest retailers in the country.

What carriers support the Nothing Phone (1)?

The Nothing Phone (1) is an unlocked device. So, as long as you buy it in the country it’s officially available in, you should be good to go. That is not the golden rule, though, as there are still carriers that do things differently, with CDMA and whatnot. The device is not available in the US at all, though. You can try to import it, but be sure to check the carrier compatibility before you do.

Which carriers will sell the Nothing Phone (1)?

In the US, the Nothing Phone (1) is not available at all, not even through carriers. In the UK, O2 has the exclusive rights to sell the phone. The same goes for Telekom in Germany. That’s all that we know as far as carriers are concerned.

What colors are available?

The Nothing Phone (1) comes in two color options. The device is available in Black and White color options. The company decided to keep it simple for the launch of its first smartphone, and that makes sense. One thing is for sure, the phone’s Glyphs aka LED notification lights on the back definitely pop out more on the black variant of the phone. Both variants are priced the same, and both come in all three different RAM + storage setups we’ve talked about earlier. 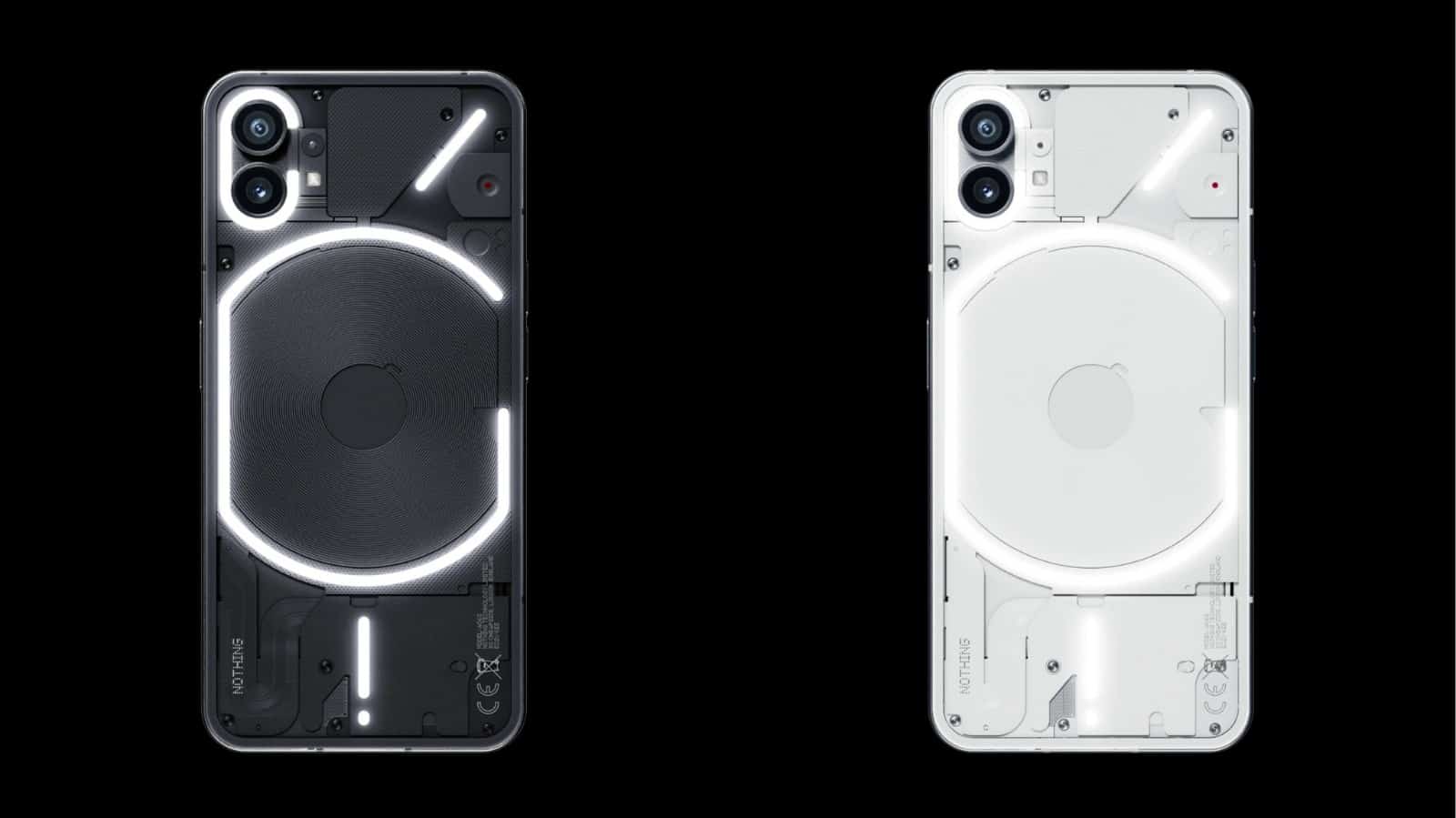 What are the specs of the Nothing Phone (1)?

Below are the specs for the Nothing Phone (1).

What new features did Nothing unveil?

The Nothing Phone (1) ships with Android 12, and the company’s Nothing OS skin on top of it. Nothing OS is very similar to stock Android, and the company focused on introducing some interesting features, rather than adding bloat to the system, and changing things that work perfectly well. Also, the Nothing Launcher runs things. In addition to some software features, there are also hardware-software ones related to the Glyph interface, but we’ll talk more about that as well.

The Glyph Interface is arguably the coolest part of the Nothing Phone (1), well, at least its design. There are a number of LED notification lights on the back of the phone, beneath the see-through glass. Now, you do have control over those lights. You can, for example, set up specific (pre-set) patterns for specific contacts. They can light up in a specific pattern when you get a call from your girlfriend, and in a completely different fashion when your mom is trying to reach you. Do note that it doesn’t work for texts or other types of notifications, at least out of the box. Nothing may change that via an update.

That’s not all, though. When you plug in the device to charge, the bottom LED will let you know what’s the charge status. It won’t be on all the time, but shaking the device will show the status again. These LED notification lights can be really useful, actually, and you can even use them to get some light on objects in low light, as long as they’re really close to the camera.

This is not exactly a feature per se, but it’s definitely worth noting. Nothing managed to keep the bezels perfectly symmetrical, they’re all the same thickness. That’s something we’ve seen on the Google Pixel 5, but not in many other phones. Just to be clear, iPhones don’t really count due to that huge forehead, which breaks the uniformity of the bezels.

The OnePlus 9 Pro did arrive with an LTPO display which was able to refresh between 1Hz and 120Hz. Well, the OnePlus 10 Pro can do the same, but it can do it even faster. The device comes with the LTPO2 display, and it will consume less power than the panel on the OnePlus 9 Pro. It is still extremely bright, large, curved, and vibrant, while it also offers a great touch sampling rate.

The Nothing Launcher allows you to supersize app icons. You can, for example, make the Instagram app icon be truly large on the home screen, if you want. You can do that with any icon, for any app that is installed on the phone. Such large icons definitely attract attention.

When you start recording a video, a red LED light will start flashing on the back of the phone. Unlike all the other LED lights, this one is red, not white. It will flash until you stop recording. That’s a nice touch, something you wouldn’t expect, that’s for sure.

What accessories are available? 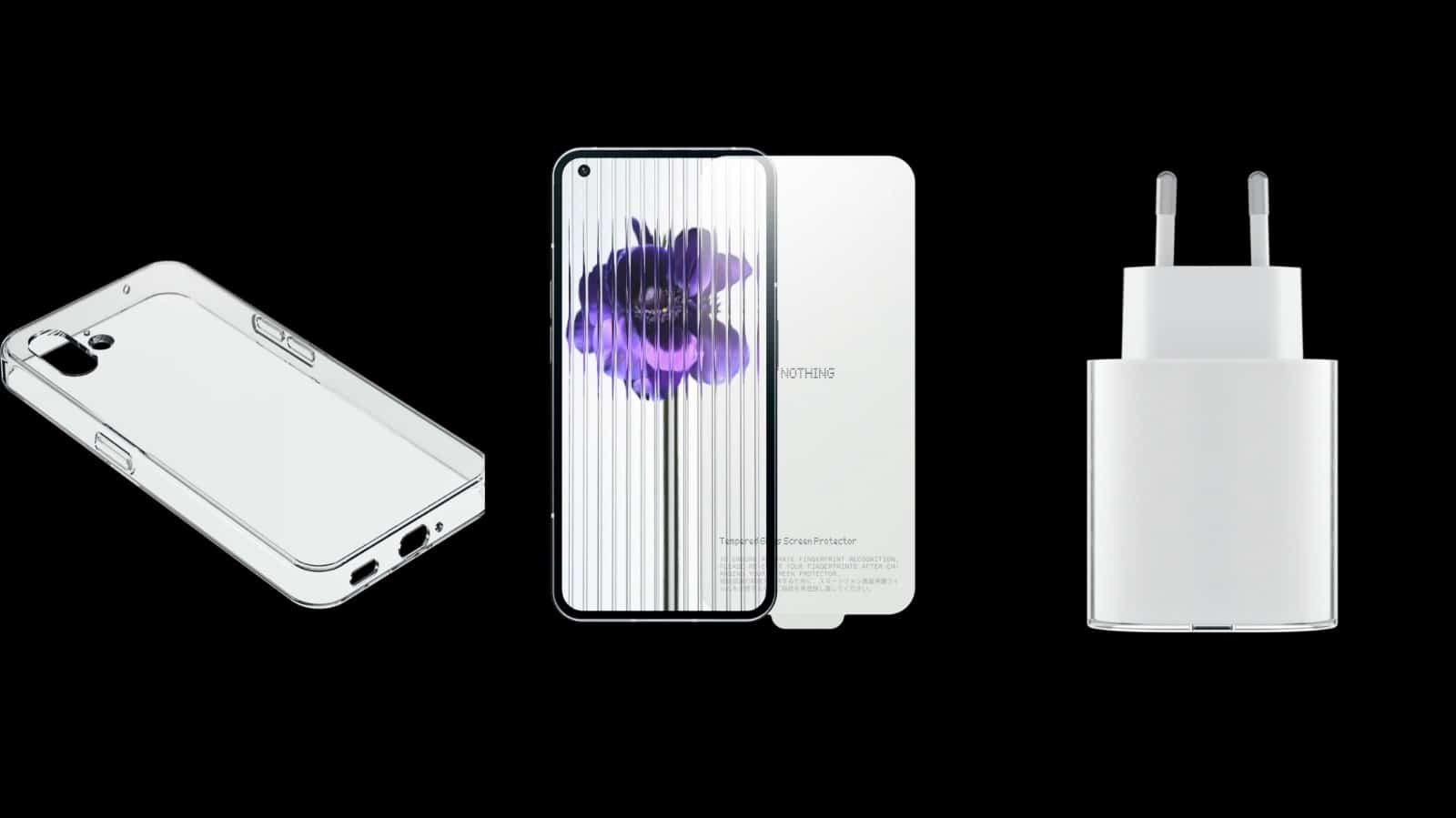 Nothing has announced three different accessories for the Nothing Phone (1). We’re talking about a case, a screen protector, and a charger. All three of them are now available to purchase. Read more about them below. 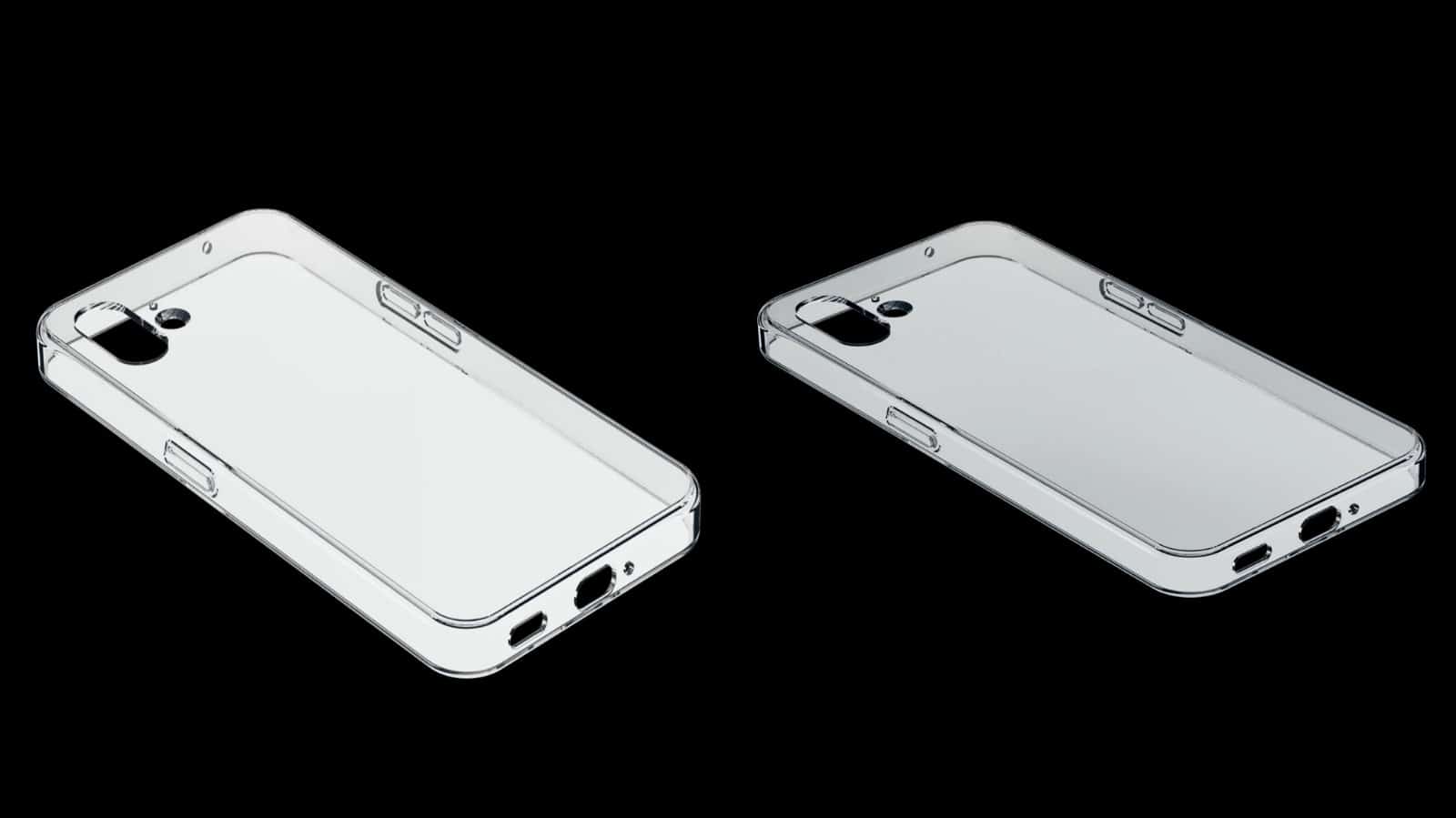 A case is available for the Nothing Phone (1), and it’s a see-through polycarbonate case. It is available in white and black variants, though black is not exactly black, considering it’s see-through. Both color options cost the same, by the way, they’re priced at €25.

Buy the Nothing Phone (1) case (Nothing) 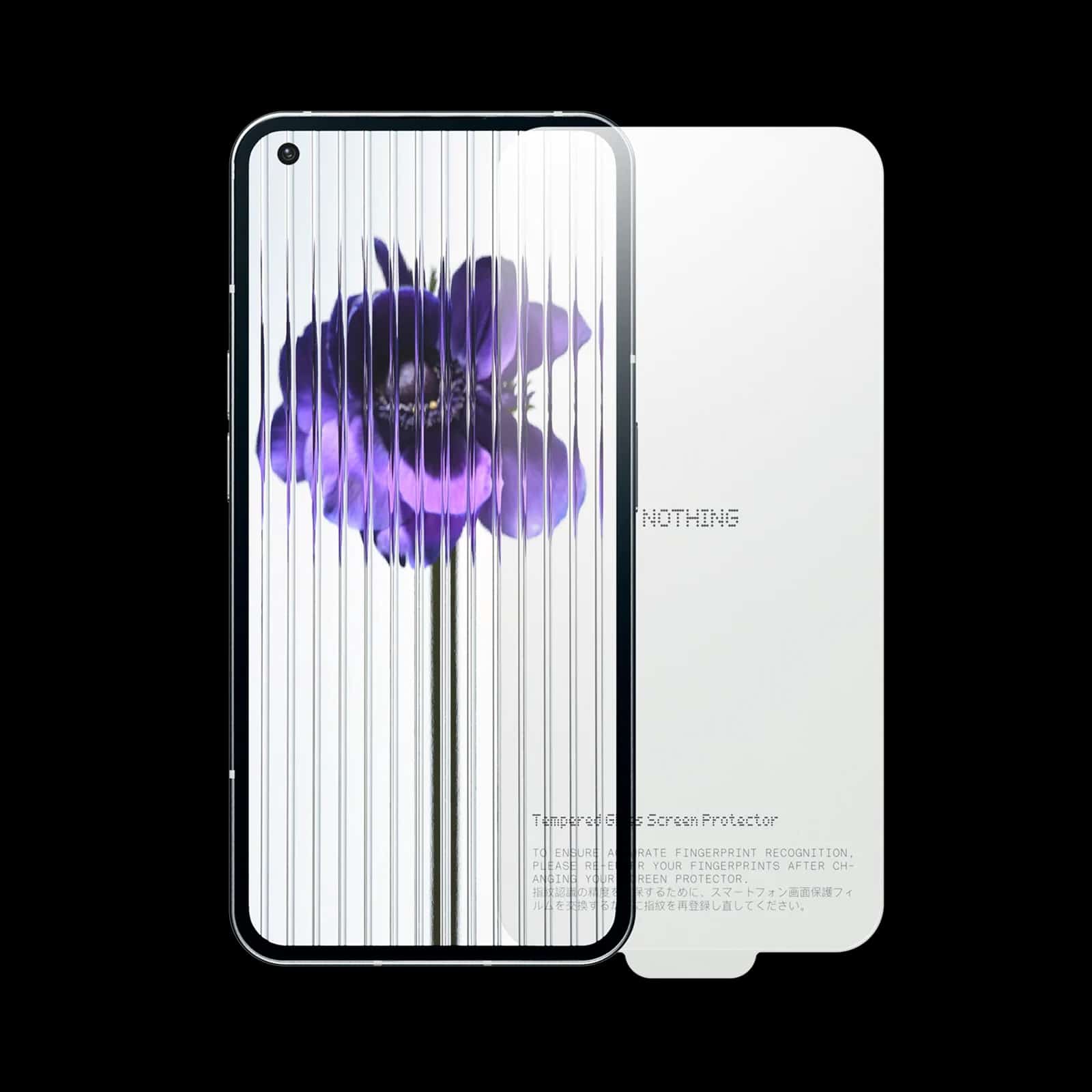 A tempered glass screen protector is also available for the device. It is scratch and drop-resistant, and it comes with an applicator kit. It also minimizes fingerprints, by the way. This screen protector can be yours for €19.

Buy the Nothing Phone (1) tempered glass screen protector (Nothing) 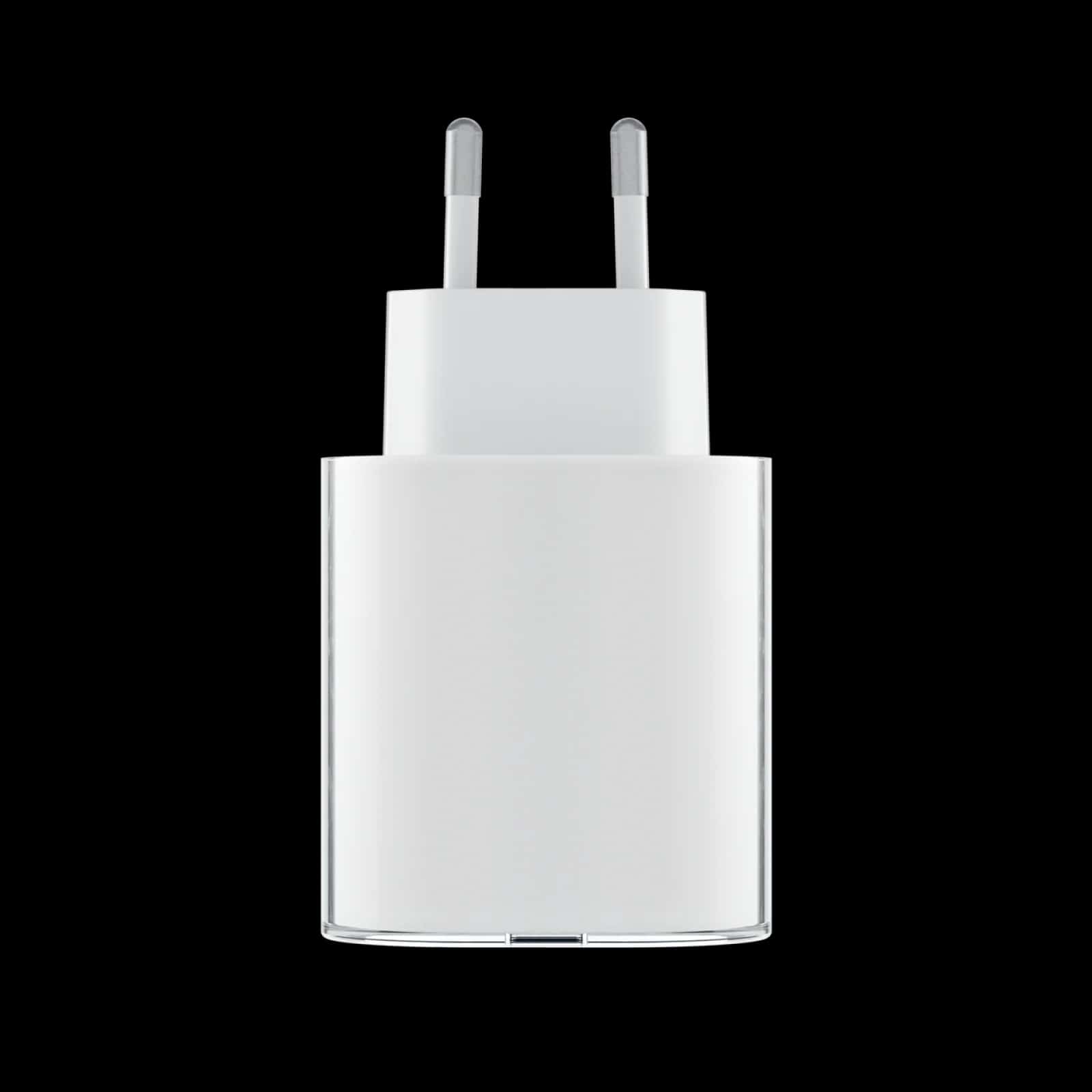 Nothing also introduced a 45W PD3.0 charger for the Nothing Phone (1). Do note that the device itself supports 33W charging, max, so you won’t be able to take advantage of the full speed of this charger. if you end up using it, though, you’ll be able to charge up the device fully in about an hour, which is not bad at all.

Buy the Nothing Phone (1) 45W charger (Nothing)